After approximately 100 years, thousands of shows, and countless patrons the Salt Lake City Pantages Theatre has reached a state of significant disrepair. In late 2019, the Salt Lake City Redevelopment Agency funded the documentation and archival of records professionally compiled by Modern Out West, a local architecture and design studio. The scope of work included a virtual tour, interactive archive, thousands of photographs, LIDAR scans, and more. It is the mission of this website hosted by the University of Utah to bring the joy and experiences of this amazing theater by democratizing all of the information and assets that were produced from this project.

Scroll down to explore the history of this amazing vaudeville theater in Salt Lake City or click “View the Archive” to view the  comprehensive digital archive.

Take a tour of the Salt Lake City Pantages Theatre in its current state.

History of the Pantages Theatre

The Pantages name has been in Salt Lake City for over 100 years. Alexander Pantages, a Greek immigrant, ran a very extensive and successful vaudeville theater circuit throughout the Midwest and Western United States in the early 1900s.

His Vaudeville shows included some incredible acts by that epoch’s standards – from swimsuit contests, to roller skating bears, to the newest movies. The Pantages vaudeville circuit offered unique entertainment for city patrons, creating a destination and source of income in their host cities.

The acts eventually became popular enough for Pantages to land a permanent name in Salt Lake City. He renovated and took over the former Colonial Theatre at 44 East Broadway (300 South) on Sept. 10, 1913, renaming the theater after himself. The first “Pantages Theatre” operated for four years. All the while, his vaudeville empire kept growing in popularity and franchise, further growing the recognizability of his name.

Vaudeville is Here to Stay

To capitalize on this opportunity, Pantages decided he wanted his “own” theater house. He had built self-named theatres in Seattle and Spokane. Rather than renovate and upkeep the repurposed Colonial Theatre for his touring group of acts, he decided to build from the ground up.

This was met with some resistance by the public as well as the State Department of Commercial Economy. At this time, steel was in short supply during the First World War. It was controversial to build an “amusement house” with such an important resource during wartime.

In the months preceding December 1918, Pantages traveled to Salt Lake City a few times in the months preceding December 1918 with his preferred theater architect B. Marcus Priteca. Pritec had already designed several other Pantages theater houses in a self proclaimed “Pantages Greek” revival style, using renaissance, mannerist, and baroque elements of antiquity in his architecture. It was decided that Pantages would build the new theater on the site of existing retail properties owned by William McIntyre. The property on Main Street, just south of the Kearns Building, housed the Lund Wagner Company, John Elliott Clark and Company, and the Cox Brothers Billiards. Pantages’s new theater would retain some retail space to accommodate some of the existing businesses.

The new theatre had estimated construction cost of $250,000 with a start date in December 1918. Progress pictures were taken by the Shipler Commercial Photography Company, whose office was just down the street. Thanks to these photos (approximately 60), we have one of the most complete set of photos documenting historic construction progress in the state. These photos are preserved by the University of Utah and State Historic Preservation Office.

Pantages’s vaudeville actresses laid the first bricks of the new stage in a small celebration downtown as the construction of the new theater progressed. 15,000 lbs of cement and 7,000 bricks were laid by the time the theater was finished. When the project was completed in November 1920, its projected cost was more than doubled, mounting to $525,00.

There are two prominent architectural features that should be mentioned. The first is the air conditioning system, one of the first of its kind in the country. The second is one of the largest Warren Trusses that were in existence at that time.

The theater, following a multitude of delays, finally opened on December 1, 1920. The completed Pantages Theatre had one of the first air conditioning systems in Utah. The interior was gilded and opulantly decorated. The interiors were graced by Greek and Roman Revival mouldings and decoration, including period furniture, artwork, and fixtures.

According to the newspapers, over 400 tons of plaster were used for the theatre’s thousands of mouldings and columns. Honduran and Phillippine mahogany were plentiful in the interior, and Alaskan marble lined the 175-foot long interior corridor, creating a robust walking sound that echoed through the hall. An entry sign bearing the name “PANTAGES” boasted the new building as it cantilevered into main street. The beautiful vaudeville house was now open for business.

A Changing of Hands

After a decade of entertainment, things took a turn for the Pantages Theatres. A series of disastrous events quickly dismantled the empire. Alexander Pantages was accused and later involved in a court case in which he allegedly sexually assaulted a 17-year-old dancer who auditioned for one of his shows. Pantages’s wife, Lois, killed a man in a DUI accident just a month later. These events along with the 1929 stock market crash led to Pantages selling six of his theaters to Radio Kieth-Orpheum (R.K.O.) for $4.5 – 5 million dollars. The ornate doors of the Pantages Theatre were shut, and a sort of renovation of the vaudeville house began under the new ownership.

It was to be reopened as a Radio Kieth-Orpheum Theatre on September 11th, 1929, again with a combination of stage vaudeville and on-screen performances. A beautifully lit sign reading “ORPHEUM” took the place of its predecessor, hanging above the crash-ridden empty Main Street. 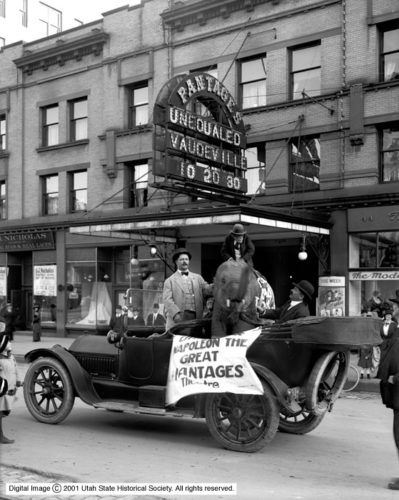 In August 1933, in the midst of the Great Depression, Radio Keith Orpheum went bankrupt. It defaulted on the lease it took over from Pantages/McIntyre. The theater and all of its furnishings were sold at public auction to the Marshall Square Building Company. To no avail, R.K.O tried to sue, claiming that it had the right to all of the assets and furnishings in the theater. The lease and deed they signed clearly gave all assets to the Marshall Square Building Company. Months of past-due rent led to an extensive list of their assets being seized from the theater, including typewriters, furniture, projectors, and more.

An ill and mostly broke Alexander Pantages came back to Salt Lake City with intent to buy back his beloved intermountain theater, saying “I spent $840,000 in building the present R-K-O Orphuem theater, formerly the Pantages Theatre, and I have every moral and legal right to regain possession of this theater, which is now closed.” (Salt Lake Tribune, July 23rd, 1933)  A month later in September, the theater was re-leased to a new group, called the Orphmar Theater Company by the Marshall Square Building Company. It was said that Pantages had big plans to return Vaudeville to the theater industry instead of movies, and that he was to re-lease the Hollywood, Seattle, and the Salt Lake theater from the current bondholders. His plan was unsuccessful and Pantages retired in Southern California to a life of horse race gambling.

The Utah R.K.O. Pantages Theatre would continue to be operated by the Orphmar Theater Company. It would be known as the Orpheum Theater in name, and later the Utah Theater. The theater showed films mostly through the rest of its life, while being operated by multiple local theater operators and businessmen.

When the Orphmar lease expired in 1941, prominent car dealership tycoon husband and wife team, Fred A. and Lucille Carleson, took over the lease. Shortly afterwards, original lessor and property owner William McIntyre died, and his wife Phoebe O. McIntyre signed over the property deed and lease over to the Carlesons permanently via a quit-claim deed. In 1945, the Carlesons moved their assets, including the lease and property, to their new company, the Triple Annuity Corporation and continued to have Intermountain and Salt Mount theaters operate the content shown at the theater.

In 1968, the Utah Theater closed again, but this time for renovations. Intermountain Theaters renewed their lease with the Carlesons and was cleared for a large-scale renovation on the Pantages Theatre. The construction promised to add allure to the downtown entertainment of Salt Lake City by splitting the theater into two separate theaters. This was achieved by the addition of a floor at the mezzanine level and walls dividing patron entry/exits. The upper, “Penthouse Theater” would seat 624, and the lower “Utah Theater” would seat 807 patrons. It reopened on July 12th, 1968 with a premier of Rosemary’s Baby playing downstairs and Doctor Doolittle playing upstairs in the Penthouse.  Some patrons who grew up going to films at the Utah and Penthouse theaters recall that when upstairs, one could clearly hear the movie playing downstairs.

Photos were taken in October 2020 by Modern Out West. The camera was repositioned and perspective corrected to be nearly identical to the original Shipler Commercial photographs taken in 1918. Use the slider bars to compare what the theater looked like when it had just been built, and what it looks like now. 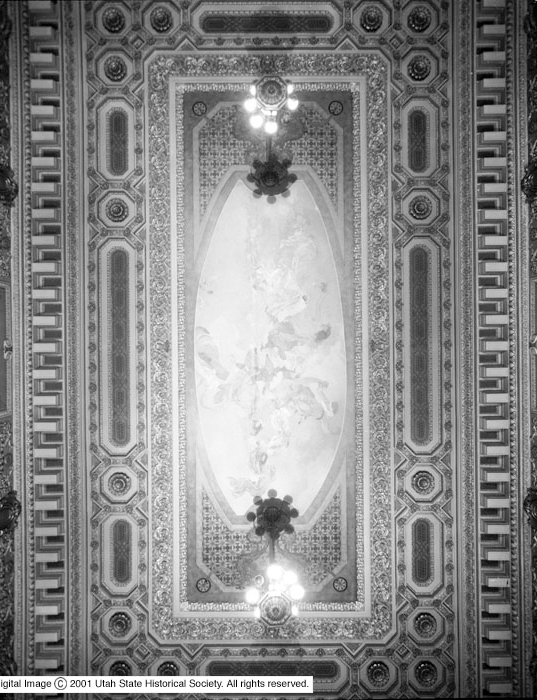 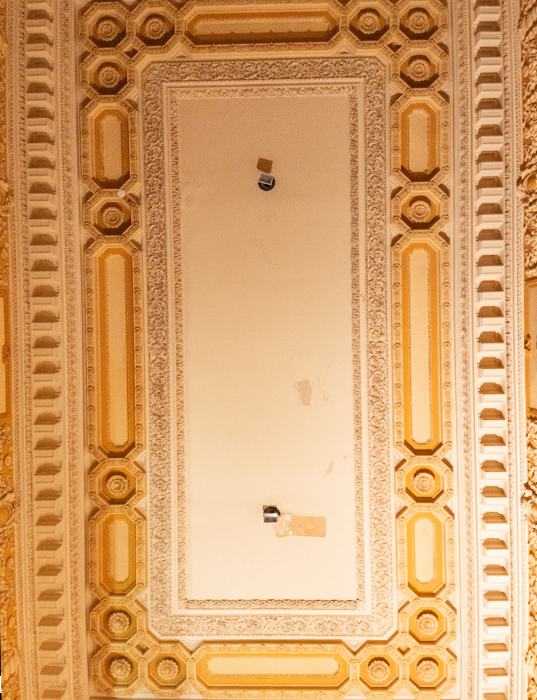 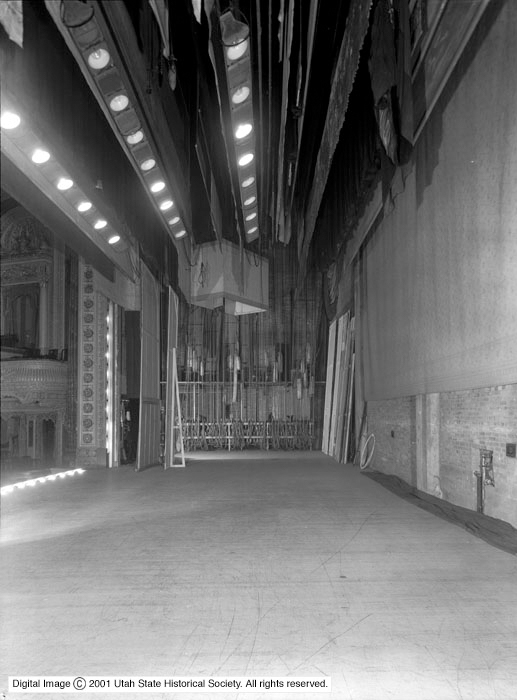 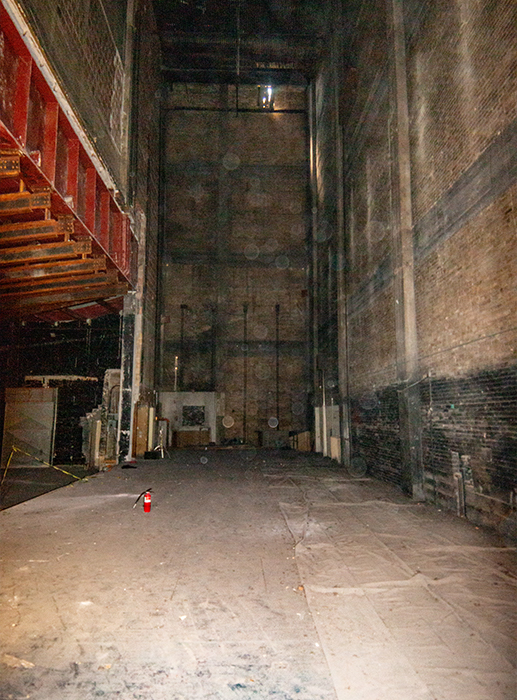 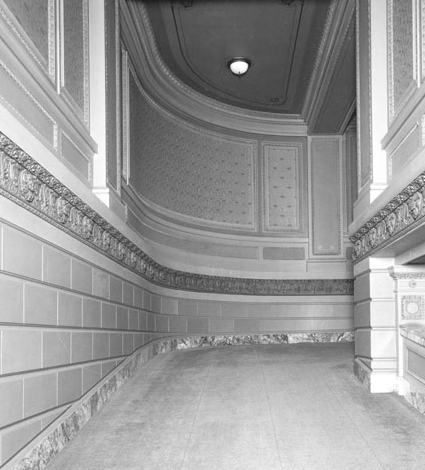 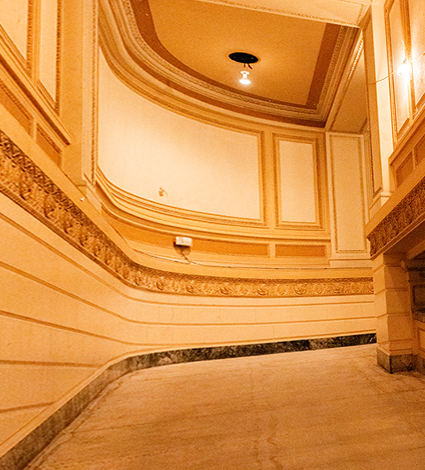 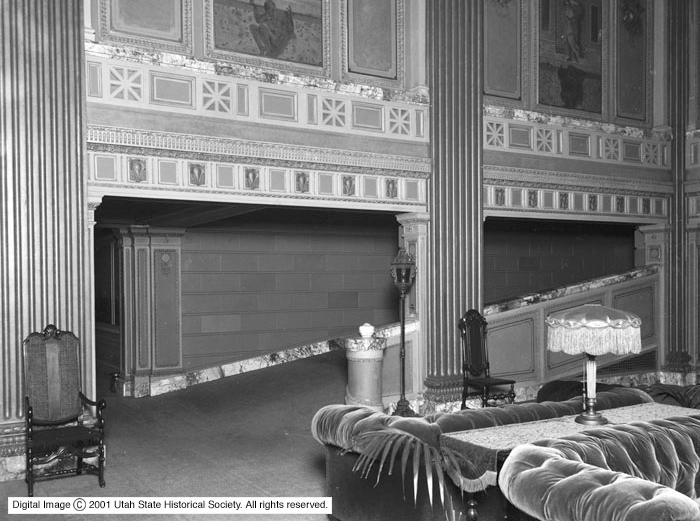 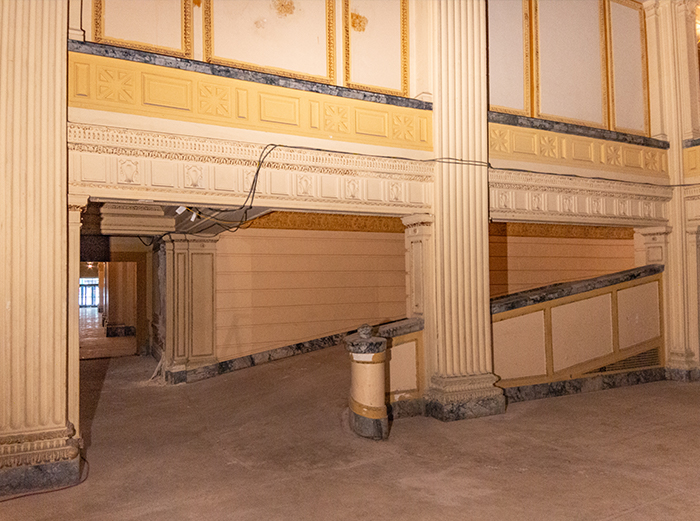 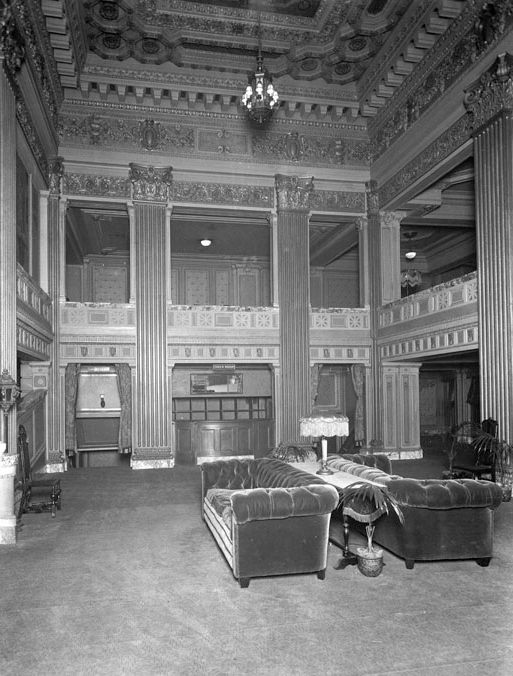 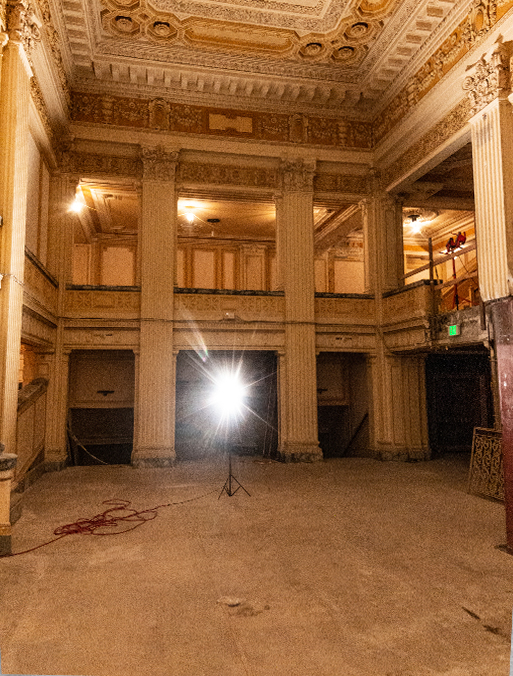 End of the Road

The theater later changed ownership to the Little America Refining Corporation in 1975. It then quickly changed hands ownership to individual Raye C. Ringholz, and then passed to the son of Utah contractor Richard J. Howa. During this time, the theater was unoccupied and fell into disrepair due to neglect. It was originally slated for demolition by the Howa group, but it was then acquired by  the Redevelopment Agency of Salt Lake City (RDA) on January 5th, 2010. The RDA intended to rehabilitate and adaptively reuse the theater. Over the years, the RDA studied the feasibility of rehabilitation and, ultimately concluded that this was not financially viable without monumental public investment to address structural, seismic, and code compliance issues. Finally, the RDA explored the possibility of redeveloping the site with archiving and repurposing of the dozens of historic theater elements.

When plans for the Theater’s redevelopment were announced, a significant movement with efforts to prevent its demolition arose, called “Save the Utah Theater”. A change.org petition was created by the group, amassing 4,700 signatures to petition the mayor and RDA not to demolish the Pantages Theatre, but to restore and save it. Unfortunately, the damage that the theater sustained prior to its acquisition by the RDA was too substantial to consider restoration as a viable option for the vaudeville house, and instead chose to have the theater documented and archives shared with the public.

For many, the Utah “Pantages” Theatre represents a part of childhood, downtown staple, and a main street icon. It also is a significant piece of Utah theater, entertainment, and architectural history. The theater will documented and archived to nationally recognized preservation standards and shared publicly through this website and partner sources. New generations will be able to experience the theater who may have not had the opportunity to enter its doors. Physical elements of the theater will be selectively preserved and put on display.